Walking on the Ceiling: A Novel (Hardcover) 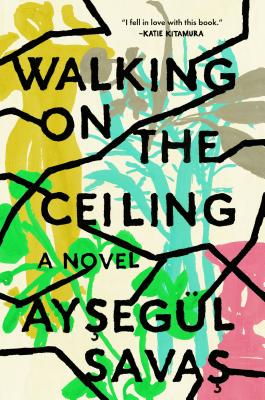 When her mother dies, Nurunisa moves to Paris and meets a writer named M. Filled with lists and loneliness, Walking on the Ceiling documents the friendship between Nurunisa (Nunu) and M, and Nunu’s childhood in Istanbul with her depressed, neglectful mother. Nunu’s distorted truths isolate her from everyone in her life. The inventories Nunu composes are her desperate attempt to remember and preserve her various versions of the truth and the details that bring them to life. Savaş has written a devastating and beautiful novel and has made Nunu herself unforgettable. -Ellis

"[Savaş] writes with both sensuality and coolness, as if determined to find a rational explanation for the irrationality of existence..." -- The New York Times

"I fell in love with this book." -- Katie Kitamura, author of A Separation

A mesmerizing novel set in Paris and a changing Istanbul, about a young Turkish woman grappling with her past and her complicated relationship with a famous British writer.

After her mother's death, Nunu moves from Istanbul to a small apartment in Paris. One day outside of a bookstore, she meets M., an older British writer whose novels about Istanbul Nunu has always admired. They find themselves walking the streets of Paris and talking late into the night. What follows is an unusual friendship of eccentric correspondence and long walks around the city.

M. is working on a new novel set in Turkey and Nunu tells him about her family, hoping to impress and inspire him. She recounts the idyllic landscapes of her past, mythical family meals, and her elaborate childhood games. As she does so, she also begins to confront her mother's silence and anger, her father's death, and the growing unrest in Istanbul. Their intimacy deepens, so does Nunu's fear of revealing too much to M. and of giving too much of herself and her Istanbul away. Most of all, she fears that she will have to face her own guilt about her mother and the narratives she's told to protect herself from her memories.

A wise and unguarded glimpse into a young woman's coming into her own, Walking on the Ceiling is about memory, the pleasure of invention, and those places, real and imagined, we can't escape.

Ayşegül Savaş grew up in Turkey and Denmark. Her work has appeared in The Paris Review, Guernica, and elsewhere, and was shortlisted for the Glimmer Train Fiction Prize and the Graywolf Emerging Writers Award. She has an MFA from the University of San Francisco. She teaches at the Sorbonne and lives in Paris.

“[A] delicate, melancholy debut novel... The unreliability of memory; the ways we talk to ourselves and to each other; how we can act as detectives in our own lives, combing the past for clues; how places can seem clearer from afar than when we are there — all these themes are touched on in Savas’s spare, disarmingly simple prose. She writes with both sensuality and coolness, as if determined to find a rational explanation for the irrationality of existence, and for the narrator’s opaque understanding of herself.”
—Sarah Lyall, The New York Times

"[A] beguiling little novel... going out for a stroll is the activity that most resembles the reading of Savaş’s book—the way people and places are observed in passing, captured in short discreet word photographs that form a sweet, sad meditative ramble.”
—The New York Times Book Review

"[A]n original, mesmerising story.... [A] beguiling tale of two cities which expertly illuminates 'the devious ways of memory.'"
—The Economist

“[T]he kind of novel that stuns you in a way both quiet and surprising, launching you into reveries of your own.”
—Nylon Magazine

“Ayşegül Savaş is an enormous new talent who writes with the rigor of Didion and the tenderness of Sebald. Walking on the Ceiling holds the immediacy of youth and the depth of long-earned wisdom at once. Its elegant voice is sure to summon old memories and longings from each reader, relighting them anew.”
—Catherine Lacey, author of The Answers

“In Walking on the Ceiling, Aysegul Savas investigates the inability of any story to accurately evoke lived experience—yet her unconventional narrative succeeds in doing just that. Savas’s celebration of the minutest details of Paris and Istanbul is juxtaposed, to devastating effect, against rising political tensions. This quietly intense debut is the product of a wise and probing mind.”
—Helen Phillips, author of The Need and The Beautiful Bureaucrat

“Walking on the Ceiling is an elegant meditation on grief, identity, memory and homecoming. Moving between Paris and Istanbul, the novel captures the tangle of narrative around history, both personal and collective. I fell in love with this book.”
—Katie Kitamura, author of A Separation

“Sensual, fragile, scented with hope and loss, Walking on the Ceiling is a powerful debut and Ayşegül Savaş is an extremely talented rising star.” —Dorthe Nors, author of Mirror, Shoulder, Signal

“Nunu calls this reminiscence of M. an ‘inventory,’ and that's exactly what Savaş has produced here, rendering with elegant intelligence the minute details of both places and people. That the novel moves in circles, acknowledging that some places can be glimpsed but never really explored, makes it all the more like a long walk through a city one can never quite call one's own. A refined and wistful exploration of the nature of memory.” —Kirkus, STARRED review

“The dislocations of place, identity, time, and truth eddy through Savaş’s elegant debut. . . . Interweaving past and present, Paris and Istanbul, evasion and epiphany in spare yet evocative prose, Savaş’s moving coming-of-age novel offers a rich exploration of intimacy, loneliness, and the endless fluidity of historical, cultural, and personal narrative.” —Publishers Weekly

“Savaş' quiet and emotionally rich novel is a tender portrait of a young woman exploring her identity and coming to terms with her personal history. … Like Elizabeth Strout’s My Name is Lucy Barton, this novel is deceptively simple and subtly profound and will appeal to those fond of character studies and lovely writing.” —Booklist