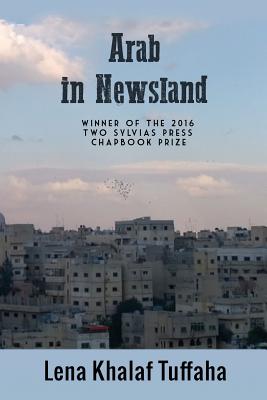 Arab In Newsland by Lena Khalaf Tuffaha is the winner of the Two Sylvias Press Chapbook Prize and was chosen by contest judge, January Gill O'Neil.

Praise for Arab In Newsland

Whenever she turns on the 'never good news, ' Lena Khalaf Tuffaha sees her relatives in Syria, Jordan, and Palestine in pain and turmoil. She sees beloved cities blasted to rubble. She knows that 'when darkness arrives the blue glow / of screens will bring you no warmth.' What does allow us refuge is her beating heart, her wide and generous intelligence. These poems take us deep into the inside story of devastation and despair. These poems make us more human. Lena Khalaf Tuffaha's brilliant poems are gifts of grace. -- Peggy Shumaker

Lena Khalaf Tuffaha has lived the experiences of first-generation American, immigrant, and expatriate. Her heritage is Palestinian, Jordanian, and Syrian and she is fluent in Arabic and English, and has academic proficiency in French. She has lived in and traveled across the Arab world, and many of her poems are inspired by the experience of crossing cultural, geographic and political borders, borders between languages, between the present and the living past. Lena writes poetry, essays and translations. Her essays have been published in the Seattle Times, Al-Ahram Weekly, and Kenyon Review Online. She translated the screenplay for the multi award-winning feature film When I Saw You, written and directed by Annemarie Jacir. When I Saw You premiered at the Toronto Film Festival in 2012 and was Palestine's official submission to the 2012 Academy Awards. She translated I Am A Guest on This Earth by Iraqi poet Faiza Sultan, published by Dar Safi Press.