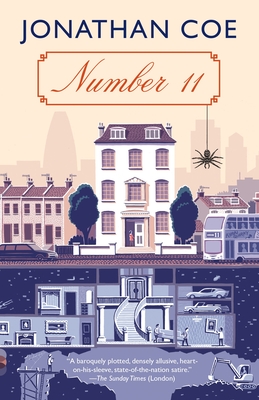 Beginning in the early years of this century, Number 11 follows two friends, Alison and Rachel, as they come of age. As the narrative progresses from the aftermath of the Iraq War to the present day, its scope broadens to include others who are variously connected to these two girls: Alison’s mother, a has-been singer, competes on a grisly reality TV show; Rachel’s university mentor finally confronts her late husband’s obsessive search for a German film he saw as a child; a young police constable investigates the seemingly unrelated deaths of two stand-up comedians; and a giant spider lurks in the darkness beneath one of London’s most staggeringly expensive neighborhoods. Combining his signature humor, psychological insight and social commentary, Jonathan Coe holds up a disquieting, unforgiving mirror in which to reflect a world where the systems are broken and everyone can—and perhaps must—name his or her own price.

Jonathan Coe’s awards include the John Llewellyn Rhys Prize, the Prix du Meilleur Livre Étranger, the Prix Médicis Étranger, and the Bollinger Everyman Wodehouse Prize for Comic Writing. He lives in London with his wife and their two daughters. www.jonathancoewriter.com

“Darkly funny. . . . An open-choked literary shotgun, doing the maximum amount of satirical damage to the widest possible swath of targets. . . .  Maybe it's the perfect book for our time.” —NPR

“A sequel of sorts to Coe’s The Winshaw Legacy. . . . Weighty topics are leavened by a mischievous narrative and a gothic humor.” —The New Yorker

“Raucous and ridiculous fun. . . . [Number 11] deepens and affirms Coe’s reputation as the best English satirical novelist of our times.” —The Spectator

“A reflection on all that is corrupt and dispiriting about modern life—from free-market capitalism to social-media bullying. . . . You can't stop reading. . . . I was haunted for days.” —Liz Hoggard, The Independent

“A literary crossword puzzle of a political novel, disguised in the form of a piece of fiction. . . . You’re in the presence of Britain’s arguably best current novelist.” —The Buffalo News

“A very good book indeed. . . . What Victorians called ‘a condition of England’ novel.” —The Times (London)

“Number 11 is undoubtedly a political novel. It is also an interrogation of the purposes and efficacy of humour in exposing society’s ills, and a spoof on horror B-movies (its deus ex machina comes in the form of giant spiders).” —The Guardian