The Russian Job: The Forgotten Story of How America Saved the Soviet Union from Ruin (Paperback) 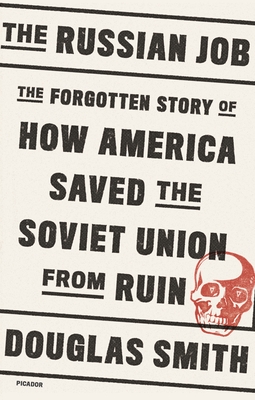 By Douglas Smith
$18.00
Not Yet Published

An award-winning historian reveals the harrowing, little-known story of an American effort to save the newly formed Soviet Union from disaster

After decades of the Cold War and renewed tensions, in the wake of Russian meddling in the 2016 election, cooperation between the United States and Russia seems impossible to imagine—and yet, as Douglas Smith reveals, it has a forgotten but astonishing historical precedent.

In 1921, in the throes of one of the worst famines in history, the new Soviet government under Vladimir Lenin invited the American Relief Administration, Herbert Hoover’s brainchild, to save communist Russia from ruin. For two years, a small, daring band of Americans fed more than ten million men, women, and children across a million square miles of territory. It was the largest humanitarian operation in history—preventing the loss of countless lives, social unrest on a massive scale, and, quite possibly, the collapse of the communist state.

Today, almost one hundred years later, few in either the United States or Russia have heard of the ARA. The Soviet government quickly erased the memory of American charity from Russian minds. In the United States, fanatical anti-communism would eclipse the historic partnership with the rival superpower. Now Douglas Smith, an award-winning historian and the author of Rasputin and Former People, resurrects the American relief mission from obscurity, taking the reader on an unforgettable journey that reveals the heights of altruism and the depths of depravity. The story of the ARA’s herculean effort is filled with political intrigue, espionage, clashing ideologies, violence, adventure, and romance, and features some of the great historical figures of the twentieth century.

In a time of cynicism and despair about the world’s ability to confront international crises, The Russian Job is a riveting account of a lifesaving cooperative effort unmatched before or since.

Douglas Smith is an award-winning historian and translator and the author of Rasputin and Former People, which was a bestseller in the U.K. His books have been translated into a dozen languages. The recipient of a Guggenheim Fellowship, he has written for The New York Times and Wall Street Journal and has appeared in documentaries with the BBC, National Geographic, and Netflix. Before becoming a historian, he worked for the U.S. State Department in the Soviet Union and as a Russian affairs analyst for Radio Free Europe/Radio Liberty. He lives with his family in Seattle.

A Financial Times Best Book of the Year

“These young men [of the ARA] come to life in Smith’s book, flickering past like characters in the black-and-white movies of the era. Their heroism and failings, their love of Russia (and Russian women) help humanize a story that could all too easily slip into the grim abstraction of statistics . . . Despite the epic sweep, the horror and moral splendor of this story, it is essentially unknown to both Russians and Americans; the Russians soon found the aid both a humiliation and a cover for espionage, while the Americans let it slip into the country’s general ahistorical amnesia.” —Richard Lourie, Los Angeles Review of Books

“The American troops who landed in Russia to help reverse the Bolshevik coup of 1917 did little to change history, but cast as imperialist villains, they were useful to Soviet propagandists charged with rewriting it. In The Russian Job, Douglas Smith tells the remarkable tale of a different, largely forgotten yet infinitely more effective intervention . . . A well-written account of a story that should not have passed into obscurity.” —Andrew Stuttaford, The Wall Street Journal

“The Russian Job by Douglas Smith repudiates the modern mythologies of both [the United States and Russia], and their leaders’ twisted histories . . . It is not just Russia that needs to be reminded of this story—so does America, which derived much of its 20th-century greatness from its values rather than military power.” —The Economist

“[The ARA] has been undeservedly forgotten . . . Succinct and readable.” —Anna Reid, Literary Review

"Based on rich archival materials, [The Russian Job] focuses on a group of young Americans who set off for Russia, lured by the exotic and the unknown, and found themselves in the middle of a horrific tragedy . . . Rare photos included in the book lend Smith’s account an eerie vividness." —Maria Lipman, Foreign Affairs

"Douglas Smith’s The Russian Job reads like a thriller as he describes the commitment of anti-communist capitalists helping the Russian people survive one of history’s most devastating famines.” —Nick Lacata, Daily Kos

"The hair-raising account of a great humanitarian act . . . Smith adeptly navigates all elements of the story . . . This expert account deserves a large readership." —Kirkus

"[Smith's] prose moves at a fast clip . . . An intriguing window onto the humanitarian work of the past." —Publishers Weekly

"In July 1921, a massive humanitarian mission was initiated by American philanthropist Herbert Hoover to rescue the Russian people from a famine of cataclysmic proportions. The Russian Job pulls no punches in its brilliant, disturbing and at times horrifically graphic descriptions of people on the abyss of starvation, some of them driven to the ultimate crime of cannibalism. The sufferings witnessed by the American team were unimaginable and left an indelible impression that would haunt them for the rest of their lives. This is an important story that needed to be told and Douglas Smith has produced a fast moving and most compelling read." —Helen Rappaport, author of The Romanov Sisters: The Lost Lives of the Daughters of Nicholas and Alexandra