The Preservation Kitchen: The Craft of Making and Cooking with Pickles, Preserves, and Aigre-doux [A Cookbook] (Hardcover) 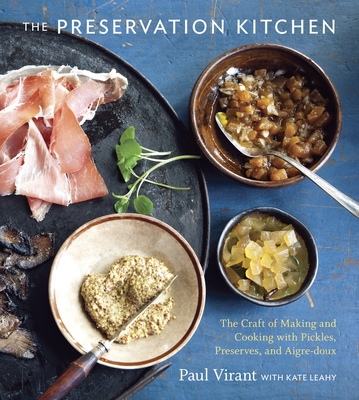 Pairing science with art, Paul Virant presents expert preserving techniques, sophisticated recipes, and seasonal menus inspired by the award-winning fare at his restaurant, Vie, in Western Springs, Illinois. Imaginative tangy jams, brandied fruits, zesty relishes, cured meats, and sweet and savory conserves are the focus of the first half of this book, while seasonal menus pairing these preserves with everything from salads and cocktails to poached fish and braised meat compose the second. Brandied Cherries used in Cherry Clafoutis, or as a garnish for the Beer-Jam Manhattan, are a sweet reminder of the summer harvest. And the Chicken Fried Steak with Smoked Spring Onion Relish anticipates warmer days when you’re still deep in winter.

Alongside recipes and menus, Virant draws on his extensive technical knowledge and experience to provide detailed and comprehensive guidelines for safe canning practices, testing pH, pressure canning, water bath processing, and storing. But no matter how precise the science, Virant never forgets the art in each handcrafted preserve and thoughtfully developed recipe. His unique approach re-imagines seasonal eating by harmonizing opposite or unusual partnerships: the brightness of summer fruit may be tempered with the earthiness of meats and winter produce, or the delicacy of spring vegetables might be enriched by the robust herbs and spices more typical of fall. The Preservation Kitchen not only demonstrates and instructs, it encourages and explores the limitless possibilities of capturing the seasons in a jar.

Chef-owner Paul Virant’s name is synonymous with local, seasonal eating, a distinction that has brought him accolades from national and regional publications. In 2005, before his restaurant, Vie, had been open for a full year, Chicago Magazine named Virant the city’s Best New Chef. Soon after, Vie was featured in Food & Wine, the Chicago Tribune, the Sun-Times, and Time Out Chicago. In 2007, Food & Wine named Virant among its Best New Chefs, in 2010 Vie picked up a Michelin star, and in 2011 Virant was nominated for a James Beard award. In addition to awards, Virant has appeared on NBC’s Today and, with chef de cuisine, Nathan Sears, competed in a close match on Iron Chef America. In addition to running Vie, Virant became chef and partner at Perennial Virant in Chicago in 2011.

KATE LEAHY co-authored A16 Food + Wine, the IACP Cookbook of the Year and recipient of the IACP Julia Child First Book Award; SPQR; The Preservation Kitchen, which Eater.com ranked as one of the most notable books of the year; and Cookie Love.

“Advanced, intelligent pickling recipes from the starred Chicago chef, plus inspiring seasonal menus in which to use them.”
—New York Times Book Review

“Virant is a fine coach for cooks accustomed to packing strawberry freezer jam into upping their game and inspiring those interested in keeping local flavors on their table year-round.”
—The Chicago Tribune, 4/11/12

“With clear instructions and a full seasonal spectrum of inspiration, this has already made its way to the top of my stack of spring cookbooks.”
—KQED Bay Area Bites, 4/9/12

"The Preservation Kitchen makes us want to can everything."
—chicagoist.com 4/9/12

"If any book could inspire me to can, it's this one...To flip through this book is to await every turn of the season and every visit to the farmer's market to come."
—Time Out Chicago: Cookbook of the Week 4/5/12

“Virant's suggestions for cooking with preserved foods are helpful for both beginning and experienced cooks, and provided menu plans focus on making the preserves shine. A unique guide to elevating pickling and preserves, recommended for adventurous cooks and eaters.”
—Library Journal, 2/1/12

“Paul Virant takes us on a delicious journey in The Preservation Kitchen, to unexpected spots that ring of traditions long forgotten, to exciting places that our palates want to savor for hours. Paul’s Fried Chicken with Cherry Bomb Pepper Sausage Gravy and Drop Biscuits is soul food for a new millennium and his Beer Jam and Ramp Sauerkraut may just show up on my restaurant menus.”
—Rick Bayless, Chef/Owner of Frontera Grill, Topolobampo, and XOCO, Chicago

“Along with being a great technical guide to preserving fruits and vegetables, The Preservation Kitchen gives the reader a first-hand look at Paul’s exceptional talent and culinary philosophy. By sharing his immense knowledge and passion, he leads the way as a great craftsman and mentor for future generations of food professionals and enthusiasts. Paul’s zest for life and great food is contagious!”
—Jacquy Pfeiffer, Founder of The French Pastry School

“Paul Virant’s approach to the modern kitchen extends seasonal boundaries far beyond nature’s reach. By suspending local treasures in time, and incorporating them creatively, he has redefined American cooking as we know it. Truly a jar star!”
—Paul Kahan, Executive Chef/Partner of Blackbird, avec, The Publican, and Big Star

Virant offers seasonally inspired menus—beef chili with pickled candy onions, chased by his wife’s chocolate chip cookies, for a wintry warmer; grilled and pickled summer squash salad and summer berry soda floats for a breezy supper—that make use of the fruits (and veggies) of their labors. Geared toward ambitious home cooks and professional chefs, these recipes could inspire the rest of us to fit into one of those categories.
—Carly Boers, chicagomag.com