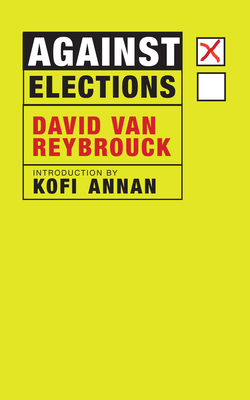 I am for more democracy. Van Reybrouck spells out why elections are—in fact and practice—anti-democratic, and identifies the malaise we are in as Democratic Fatigue Syndrome. He makes an absolutely compelling and convincing case for Sortition—the drawing of lots. This practice creates an opportunity for citizens to actively engage in deliberative democracy rather than continuing to support an "elected" aristocracy through elections. A sorely needed antidote to our corrupted, money-soaked, ineffectual system. -Greg

A small book with great weight and urgency to it, this is both a history of democracy and a clarion call for change.

"Without drastic adjustment, this system cannot last much longer," writes Van Reybrouck, regarded today as one of Europe's most astute thinkers. "If you look at the decline in voter turnout and party membership, and at the way politicians are held in contempt, if you look at how difficult it is to form governments, how little they can do and how harshly they are punished for it, if you look at how quickly populism, technocracy and anti-parliamentarianism are rising, if you look at how more and more citizens are longing for participation and how quickly that desire can tip over into frustration, then you realize we are up to our necks."
Not so very long ago, the great battles of democracy were fought for the right to vote. Now, Van Reybrouck writes, "it's all about the right to speak, but in essence it's the same battle, the battle for political emancipation and for democratic participation. We must decolonize democracy. We must democratize democracy."
As history, Van Reybrouck makes the compelling argument that modern democracy was designed as much to preserve the rights of the powerful and keep the masses in line, as to give the populace a voice. As change-agent, Against Elections makes the argument that there are forms of government, what he terms sortitive or deliberative democracy, that are beginning to be practiced around the world, and can be the remedy we seek. In Iceland, for example, deliberative democracy was used to write the new constitution. A group of people were chosen by lot, educated in the subject at hand, and then were able to decide what was best, arguably, far better than politicians would have.
A fascinating, and workable idea has led to a timely book to remind us that our system of government is a flexible instrument, one that the people have the power to change.

David Van Reybrouck is considered "one of the leading intellectuals in Europe" (Der Tagesspiegel) and is a pioneering advocate of participatory democracy. He founded the G1000 Citizens' Summit, and his work has led to trials in participatory democracy throughout Belgium and Holland. He is also one of the most highly regarded literary and political writers of his generation, whose most recent book, Congo: The Epic History of a People, won 19 prizes, sold 500,000 copies and has been translated into a dozen languages. It was described as a "masterpiece" by the Independent and "magnificent" by The New York Times.

After finishing her studies at the University of Manchester, Liz Waters (translator) worked for some years with English-language texts and at a literary agency in Amsterdam before becoming a full-time translator of literary fiction and non-fiction. Authors whose books she has translated include Lieve Joris, Jaap Scholten, Luuk van Middelaar, Douwe Draaisma and Geert Mak.

"Choosing our rulers by popular vote has failed to deliver true democratic government: that seems to be the verdict of history unfolding before our eyes. Cogently and persuasively, David Van Reybrouck pleads for a return to selection by lot, and outlines a range of well thought out plans for how sortitive democracy might be implemented. With the popular media and the political parties fiercely opposed to it, sortitive democracy will not find it easy to win acceptance. Nonetheless, it may well be an idea whose time has come." —J.M. Coetzee

"In compelling us to subject all our received ideas and deeply held convictions to rigorous scrutiny, this fine iconoclastic work could not be more timely. David Van Reybrouck reveals the startling historical fact that the French and Americans chose the electoral method precisely because it was undemocratic and then goes on relentlessly to demonstrate that far from safeguarding our right to self-determination, elections are actually impeding our democracy." —Karen Armstrong

"Mounts a convincing case that we have wrongly conflated democracy with elections." –The Observer (London)

"Van Reybrouck wants to revive a system in which government is not just for the people, but really by the people ... a persuasive description of a system designed to be soundly based in popular assent ... A President Trump might focus attention on his views." –The Financial Times (of London)

"Very persuasive . . . There are few new big ideas in politics and few answers to the serious challenge faced by democratic politics . . . invigorating and advance[s] a promising practical idea . . . fresh, challenging and uncomplicated." –The Times (London)

"A radical remedy to save the essence of democracy, which is diseased and potentially dying.>The provocative title doesn't tell the whole story. As European intellectual Van Reybrouck (Congo: The Epic History of a People, 2014, etc.) argues, what we need is not less democracy but purer democracy. Those who equate democracy with elections, he writes, are wrong. To the contrary, elections are anti-democratic, establishing a political aristocracy that is disconnected from and distrusted by voters. Thus, "it would appear that the fundamental cause of Democratic Fatigue Syndrome lies in the fact that we have all become electoral fundamentalists, despising those elected but venerating elections." If DFS is the rapidly worsening disease, what is the cure? The author carefully builds a historical case for a return to the classic Athenian principles of democracy, in which citizens contributed not by vote but by lot. Those representing the masses in running the government were chosen the way that modern democracies generally choose juries, putting important decisions in the hands of citizens chosen randomly rather than by vote or merit and allowing them to deliberate toward a consensus. A fairly recent inspiration for this proposal comes from the concept of "deliberative democracy" advanced by a Texas academic, who proceeded from the oversized influence that unrepresentative states such as Iowa and New Hampshire have on the presidential selection process to suggest that a smaller, more diverse group be assembled to deliberate, a process that would be more likely to change minds than the polarization we have now. Among those most aghast at such a radical shift have been the political parties and the media, who serve as gatekeepers, as well as others with a vested interest in the status quo. However, "why do we accept the fact that lobbies, think tanks and all kinds of interest groups can influence policy yet hesitate to give a say to ordinary citizens, who are after all what it's all about?" Readers who disagree with the cure may at least recognize the incisiveness of the diagnosis." –Kirkus Reviews